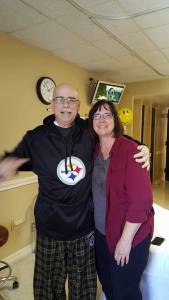 In the hospital, after the crisis

Since I began my walk with the Lord, I’ve believed in the power of prayer. That’s because I’d seen the results time and time again. I know one way or another, God does answer.

But that isn’t all there is to prayer.

I found that out in a dramatic way this summer when my husband went through renal failure—a catastrophic illness. We rushed him to the hospital. According to the doctor, he was hours from death. The medical team went to work to save his life. I made calls and sent out texts, requesting prayer from everyone I knew.

Almost immediately, I had a sense of peace.

We were not afraid, once we made it through the initial shock of the diagnosis. We felt this amazing peace as if we were being carried. Borne by unseen arms.

We sat through four hours of dialysis, wondering what the outcome would be, wondering whether this was only the beginning of an ongoing situation. Would there be permanent damage? Peace reigned in our hearts. We were not afraid. The dialysis was successful—he wouldn’t need another. They located the root cause: large stones blocking both kidneys. As soon as he was stable, and the infection cleared, the doctors would deal with the stones.

I find it difficult to express the gratitude I feel for all those who took a moment out of their day to whisper a prayer. Some didn’t whisper—I know them—they shouted. That’s great. I love that. The prayers are heard, though you shout or whisper or only think. The important part is that you prayed.

Prayer for another’s need is an extreme act of kindness. It may seem a small thing to you. But it’s the shot heard around the world. It’s the mouse that roared.

So when you see that request on Facebook, how should you respond? Pass on by?  Comment with a sad face emoticon? Type the word, “Praying!” That’s often what I do, and I mean it, I really am praying. It may not be a complicated prayer, but it’s a heartfelt one. It only takes seconds, unless I feel I need to spend more time.

No matter how these calls come in, whether

texted or spoken—whether they’re coming from a family member, friend, acquaintance, or complete stranger—answer them. These small, very personal acts of kindness are laying a foundation, sowing seeds of faith, building relationships, and setting up a structure that you can draw on when you’re the one in need. Have you ever thought about that? I hadn’t, until I found myself in this situation.

During the times when we were too shocked to utter our own, I felt the strength of those prayers behind us, before us, and bearing us up. We weren’t alone. We had an army standing with us. We didn’t need to see them, we knew they were there. We felt their presence through prayer.

Betty Thomason Owens writes romantic comedy, historical fiction, and fantasy-adventure. She has contributed hundreds of articles and interviews to various blogs around the internet and is an active member of American Christian Fiction Writers (ACFW), where she leads a critique group. She’s also a mentor, assisting other writers and a co-founder of a blog dedicated to inspiring writers.

On a personal note, Betty Thomason Owens was born in the Pacific Northwest,  grew up in Southern California and West Tennessee. The daughter of a self-proclaimed nomad, she attended eleven different schools by high school graduation in Kentucky. She and her husband, an EIT (electronics instrumentation technician), have three sons, a couple of beautiful daughters-in-law, five granddaughters and two grandsons (at last count).

An office manager/bookkeeper for 15 years, she is semi-retired and pursuing her other loves––gardening, cooking, spending time with the grands, and of course, writing.