I’d been in the hospital for 4-5 weeks, after having had surgery. I couldn’t do anything for myself and had to have somebody at my bedside 24/7 due to the severity of my pain. I needed more attention than the staff could provide with everyone else’s needs there. So Mom and Dad came in shifts.  After a time, my extended family realized  they needed to help my folks, so Aunt Mina came out from California for a few weeks to give them some relief.

She sat at my side, talking when I needed conversation and just providing her presence when I needed to rest. She, Mom, and Dad worked with the doctors and therapists to help me learn to move my arms, hands, fingers legs and feet again, helping me perform the exercises they assigned.

Aunt Mina recognized our emotional needs as well. When a friend brought her grandchildren and they came in with homemade cards where they’d traced their hands and feet for me to make me smile. It sparked Aunt Mina’s creativity.

A week or so later I got an envelope in the mail. It was from my cousin Gwen, but it wasn’t a letter or card.  Instead it had two hands and two feet cut out wit

h the words “feet to stand on. Hands to support you.  Love, Cousin Gwen”

Two days later, I got another letter—from friends Bill and Merle Jeanne. 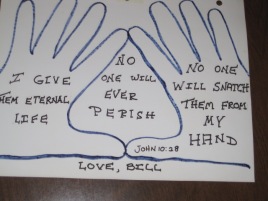 Like the one from Gwen, it had cut-outs of their hands and feet. It was accompanied by Scripture to encourage 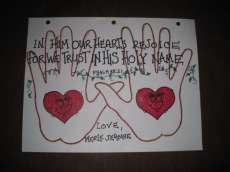 me in my recovery.

Pretty soon, I was getting lots of letters like this. One was a yellow 12” ruler with the words “Uncle Jim’s Foot” down the center.

Another was a paper with tire tracks labeled Uncle Mike’s feet.  He’s a truck driver.

“I don’t know, but you sure are getting a lot of them.”

Several months later, after I got home, we learned that Aunt Mina had looked through Mom’s e-mail address book on the sly and had sent out an e-mail to several of their friends suggesting they all trace their hands and/or feet and send it to me at the hospital to make my folks and me smile and laugh. It worked.

Twelve years later I still have those cards to remind me how much people cared and reached out to me when I most needed it.  It was a small act of kindness that  I still treasure over a decade later.  You never know how much you may impact someone in what you do or say.