It was a beautiful day so I took my basset, Petey, for a walk. We headed down the cul-de-sac and saw my neighbor, Bonnie, walking her dog, Hattie. Hattie’s a brownish-red pug who’s about three. When Petey spotted her, he got excited.

“You can say hi,” I said. We headed toward them and Petey lunged, pulling me down. Bonnie tried to catch me but it happened so fast, she couldn’t. Because I’d had one hand on the leash, I couldn’t block my fall, so I hit the pavement face first. Twice. I screamed out in pain. Bonnie grabbed hold of me, held me still, and told me to stay down, not wanting me to injure myself even worse. Francis, another neighbor, came out and pretty soon they had a pillow under my head, cold compresses on my face, and two blankets over the rest of me.

I’m not sure how long it was before I said, “I can’t believe I’m lying out here in the middle of the street.”

“It’s okay. We’ve got you. Just lie there” Francis said.

“Don’t get up.  I don’t want you to hurt yourself any worse.” Bonnie said. She then

I told them I didn’t need EMS. They wanted to call my mom so she could come take care of me for a bit and, if necessary, drive me to the urgent care. Once I remembered her number, they called. They got no answer, so they left a voice mail. When they asked for her cell, I had no idea what it was. I gave them a friend’s number, but they recognized it and said it was wrong. About 5-10 minutes later, I came up with the right number and they called. No answer again, so they left another message.

Meanwhile, one of them got a wet facecloth and an ice pack and placed it over my eyes and nose in order to reduce the swelling. Someone else grabbed some Advil. I couldn’t sit up yet so they gave me water through a straw since I was still flat on the pavement.  Lying there in pain, I was aware enough to thank them all for being there to help me.

“That’s what neighbors are for”, they said.

Mom called back and talked to Francis.  About 15 minutes later, she arrived, drove me home, and stayed for a few hours to be sure I’d be okay. Bonnie said she’d come check on me later. I spent the afternoon resting and recovering.

About 7:00 that evening, Bonnie came over for a few minutes with Hattie to see how I was doing. It meant a lot that she cared enough to check on me. It didn’t stop there, though. Even the next day, Bonnie came and wanted to take Petey out to go for a walk, so I wouldn’t have to. I graciously accepted. When they returned she asked what time I get up in the morning.

“I’ll come take him out then.” 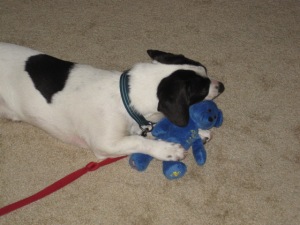 “I don’t mind. I’ve got to take Hattie out anyway. I’ll just take both of them.” So she did. When they returned, I thanked her and she volunteered to take them that evening too. It was so kind of her. Even a week later, she’s coming to help me with Petey, not wanting me to fall again.

It may not seem like a big thing to do, but my neighbors’ efforts meant a lot as I continued to recover. Small acts of kindness can make a big difference.

Ellen Andersen lives in Mauldin, South Carolina with her adorable dog, Petey. Active in her church, Ellen is a Stephen Minister, serves on the First Impression Team, and hosts a weekly Bible study. She enjoys gardening, theater, and spending time with friends and family.

5 thoughts on “Neighbors to The Rescue”