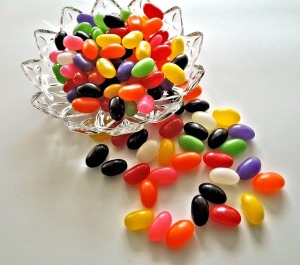 I only have one memory of my maternal grandmother, but it’s one that stands out in my mind as such an unselfish act. You see, grandma loved jellybeans, all kinds but especially the red and the orange ones.

When I was five years old, Grandma was diagnosed with a brain tumor. This was back in 1952 and there wasn’t much hope. She did have some surgery because I remember her head swathed in bandages. Funny, they didn’t frighten me. I guess because I loved her so much.

Anyway, to keep me quiet during a visit to grandma’s hospital room, mama bought me a small bag of jellybeans. I rarely got candy. I was hyperactive before they knew what hyperactivity was. But mama knew sugar would send me to the moon. However, that day, she set aside her worries over that.

I didn’t know her mother, my grandma, was dying. Maybe that’s why they allowed me into her hospital room that afternoon. She sat in a chair by the window and I ran to her. She patted her lap for me to hop up, and I did. I still remember the feeling of her squeezing me until I thought I’d pop.

I offered her some of my coveted jellybeans, which was quite a stretch. I wouldn’t have offered those to just anybody. And Grandma, being a true jellybean aficionado, knew that.

She said, “Not now, sweet one. But you can save me the black ones.”

I was thrilled because I hated the black ones. Mama always made me eat them, though, because it was a waste to throw them out. Grandma gave me a “by” with that. When we went home, I put those black jelly beans in a Dixie cup on the windowsill to save for when Grandma came to visit. A week later, Grandma donned her wings and flew to Heaven.

I kept those black jelly beans sitting on the windowsill for a year, insisting Grandma was coming for them. Mama didn’t have the heart to throw them out.

Ane Mulligan writes Southern-fried fiction served with a tall, sweet iced tea. She firmly believes coffee and chocolate are two of the four major food groups. Novelist and playwright, Ane is the executive director of Players Guild@Sugar Hill, a new community theater and president of the award-winning literary site, Novel Rocket. She resides in Sugar Hill, GA, with her artist husband and a dog of Biblical proportion. You can find Ane at her website, Novel Rocket, Facebook, Twitter, Pinterest, and Google+ 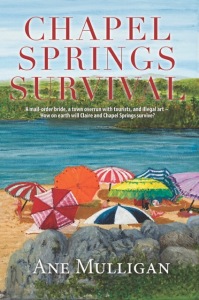 A mail-order bride, a town overrun with tourists, and illegal art.

How on earth will Claire and Chapel Springs survive?

Claire Bennett’s Operation Marriage Revival succeeded and life is good. That is until the mayor’s brother blabs a secret: Claire’s nineteen-year-old son has married a Brazilian mail order bride. When Claire tries to welcome her, she’s ridiculed, rebuffed, and rejected. Loving this girl is like hugging a prickly cactus.

Lydia Smith is happily living alone and running her spa—then the widow on the hill becomes a blushing bride. Then her groom’s adult son moves in—on everything.

From the first sighting of a country music star in The Painted Loon, Chapel Springs is inundated with stargazers, causing residents to flee the area. When her best friends put their house on the market, Claire is forced to do something or lose the closest thing to a sister she’s got. With her son’s future at stake and the town’s problems to solve, it’s Claire’s who needs a guardian angel.

One thought on “Jelly Beans on the Window Sill”